unable to  imagine its own future.

shanty house to live in.  Life held no comforts for young Barkev,  not even a basic education that he so yearned for.   His father forced him to work at the age of even.   Barkev taught himself to read and write English,  Arabic and improved on the grade 5 Armenian he learned in refugee camp school.   Against the odds,  Barkev learned to read university level physics books in English,  wrote poems in Armenian and in his spare time read the dictionary for fun.

The Civil War was both a difficult and rewarding time for my father. When the myriad of sectarian militia groups took to the streets setting up check-points and road blocks, they would leave the roads impassable. Unable to meet with others and exchange ideas, Barkev,  and many others like him,  became restless and introspective.  But when the roads opened and Barkev was able to get in his car and drive off on some adventure however small, he would immediately come back to life in a big way.

Every Sunday afternoon,  father would get behind the wheel of his white Peugeot with his five daughters and drive to the nearest town Zahlé.   He would look very handsome, sitting straight with pride. It was his escape from the realities of daily life in war.  Dad would immerse himself in the movies and get lost in their worlds.  He would laugh like a child and even cry.  When the TV stations were up and running in Lebanon,  my father would watch hours of cartoons and laugh out loud contagiously.  He had so much joie de vivre,  full of childlike curiosity and energy.  And so when he got sick with Parkinson’s it was a very hard blow for him, and for all of us.

But Bakev stayed true to his character up until the last day of his life.  He kept watching films,  car chases and cartoons,  he kept laughing even when the disease left his face expressionless. He kept dreaming even with illness-induced hallucination.   By participating in the film,  he gave the world access to his life and illness,  in the hope of helping people understand Parkinson’s disease.  And he even made it to space,  among the stars and the galaxies.

My initial concept for 23 Kilometres was an experimental essay film about my father and his illness Parkinson’s disease.  A journey film,  driving with my father to Zahlé,  the nearest town,  and along the way stop to visit all his machines,  our favourite childhood locations like the cinema and bumper cars, paralleling the journey to his illness and the state of Lebanon.   But by the time the film was finished it took several different shapes,  and it gradually took a unique life of its own.  Throughout the five years in the making, the film evolved into something that broke new ground in cinema.  And by that I’m not referring to the mixing of genres (essay film,  experimental doc,  silent drama),  rather I’m specifically referring to the way the story unfolds through a device I termed Silent Dialogue.

Barkev,  the main character of the film could not speak.  Parkinson’s disease took away his ability to converse.   My challenge was to craft a feature film with no dialogue, no interviews and no narration that could still carry a story and engage audiences,  taking them inside the life and mind of my character to experience what it feels like to suffer from Parkinson’s disease.  At first it seemed like an impossible task.  Parkinson’s patients are slow,  non-responsive,  lack facial expressions and go in and out of hallucinations.  It is extraordinarily difficult to get the audience to connect to a face that is blank and voice that is silent.  I had to figure out a way to give Barkev a voice, a voice via his inner thoughts.

In traditional cinema,  the inner thoughts of actors are heard off screen via voice over as if the character is talking to himself and we are privy to it.  But to be true to his character,  Barkev’s inner thoughts have to remain silent.  Therefore I put his thoughts on screen in an innovative text format.  As far as I know,  this has not been done before and so I found myself looking for terms to describe this new “Silent Dialogue” to the myriad of post crew including sound designers,  colourist,  and visual effects artists who collaborated with me on the film. It was confusing. I had to clarify that this Silent Dialogue was in fact an important part of the film:  it was in fact dialogue but just unvoiced. Therefore, it had to be included in the foreign-language versions of the film that normally stipulate no on-screen text.  It is inherent part of the film and it is the one true “voice” of the character.  It is part of the image of the film and therefore it can be translated, but never referred to or seen as a subtitle itself. And so the name stuck as Silent Dialogue.

A country debilitated by sectarian division,  not unlike Barkev’s diseased body,  left a shell of its former self,  dwelling on the past, 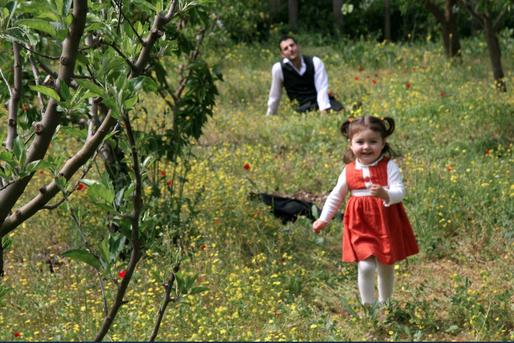 
My father Barkev has always been scientifically minded.  He was forever reading chemistry books,  building robots and fixing electricity generators – the latter very much appreciated by the villagers and friends throughout the energy-deprived Civil War years.  He took the greatest pleasure in talking about new ideas,  about the planets and the stars,  telling stories and discussing theories.

Barkev  was born in a refugee camp in Beirut,  the son of Armenian genocide survivors who had nothing more than a

What if your body became a prison?

On the Damascus Road in Lebanon’s beautiful Bekaa Valley, an Armenian man with late-stage Parkinson’s takes one last journey.

This impressionistic film is a journey into the mind and life of a man with a crippling disease.   In addition to the tremors and shakes, Barkev suffers from the lesser known ‘monster’ of Parkinson’s, the relentless hallucinations that swing him back and forth between time and space.

A machine maker and an amateur cosmologist,  Barkev can no longer speak.  Yet through his journals,  his machines,  and powerful imagery with music,  the film  travels both physically and metaphorically into the past and the future of both the man and his country Lebanon.